While that is true and can be attributed to a diverse number of reasons, in my case, Rochester is great because it’s a large city with an astonishing number of events at any given time, but small enough that it’s very likely you’ll see a familiar face when you attend an event.

Case in point, Thursday night, we attended the Greek Festival at the Annunciation Greek Orthodox Church on East Ave.

It came on that night of the week, I could no longer serve the salads leftover from Memorial Day or grill up another hot dog or hamburger for my family.  They were done with my pieced together leftovers and chicken nugget dinners!  We were ready for amusement and someone else to feed us!

Luckily, I spotted that lovely sign announcing the start of the Greek Festival while driving down East Ave yesterday afternoon.  Wahoo!  Food and entertainment!  We were so there! 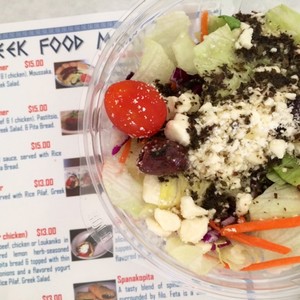 So last night, we piled into the car and drove down to East Ave. and parked on a nearby side street and followed the energetic Greek music to the Greek Annunciation Orthodox Church and it’s lively back parking lot.

There we were assailed with the delicious aroma of Greek cuisine.  We hurriedly grabbed a spot in line to order the Gyro dinner plate and a Vegetarian dinner plate.  Now these dinner plates come packed with food and I found my Vegetarian plate was enough to share with my two young children.  It included a crispy Spanakopita, Dolmades, rice pilaf, pita bread, and a Greek salad.  It was delicious.  I can’t make Spanakopita or Dolmades, so it’s a real treat when we find them!

There was enough for us to eat including the fact the girls were sneaking slices of beef off dad’s plate.  We were content and not uncomfortably stuffed and that’s how we like it because we planned on finding the pastry tent and gorging on Baklava!

As we were exiting the dining tent, we saw some clients we had not seen for a while and it was great to catch up on what was happening in their lives after the purchase of a new home.  We were delighted to meet their new son and to wish them happiness!

Then it was off to grab some rice pudding, Baklava, and something I have never had before, a Baklava ice cream sundae! 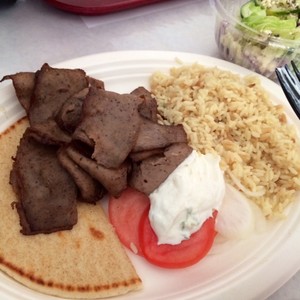 Yes, my friends, this exists and now that I know, I am convinced I am a better person for it!  Chunks of Baklava are layered in a bowl with a generous portion of vanilla soft serve ice cream, and they pour chocolate syrup over it all.  YUM.

We adjourned to the chairs set up before the stage to watch some Greek dancing and dig into our desserts.  The sun was setting, the air was a tiny bit crisp, the dancing was fun, and everyone was full.

Rochester is a great city and last night solidified my opinion even more.  Great food, friendly faces, and family fun was had by all at the Greek Festival. 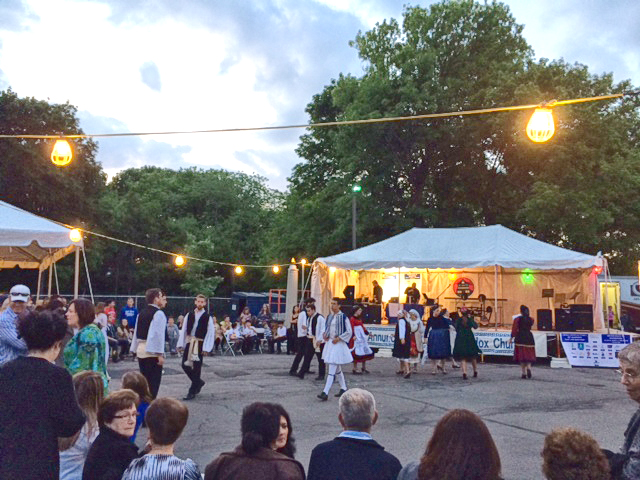